So as I said in an earlier post I purchased the Dark Vengeance set back in early 2013. I followed through on my initial plans to completely convert the Dark Angels half of the box to Chaos. Being the filthy scrub that I am I also made the brilliant decision of converting all of the bikers to the cult of Nurgle.

So I purchased an additional 4 bike models for an exorbitant retail price, and got to work. 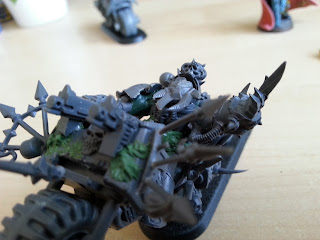 So naturally I painted up these fellows in my (at the time) usual Black Legion colours. Bright yellow base, followed by bright gold, highlighted by even brighter silver! Black? That doesn't need to be highlighted; besides it's impossible anyway! 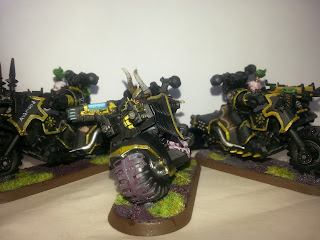 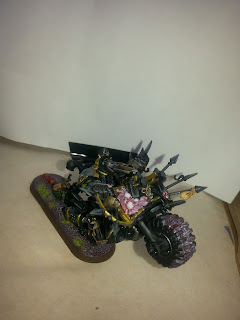 So as the years flew by (like one), and my interest in the hobby waxed and waned I began to repaint most of my miniatures. Sometimes units were repainted multiple times. I'm sure almost everyone reading this has done the same thing at some point.

Something big needed to be done about the awkward looking bikes. I needed to draw some inspiration before deciding on a new colour scheme. Although the bikes would be remaining in my Black Legion army I didn't mind if they were painted in an outsider's colours. The way I see it: the Black Legion is an open church. If you want to destroy the Imperium of Man, then we're cool with you.

Initially I started doing image searches on google for 30k death guard. To my surprise none of the returns really drew my attention. I mean there are some absolutely fantastic looking 30k armies out there, but it wasn't quite what I was seeing in my minds eye.

Then I came across this artist:

Let me just say right now that my finished product doesn't even land in the same state, never mind ball park as this beautiful mini. But holyshit, how can you see a paint job like that, and not try to replicate with a willing canvas?

Anyways, I painted up a mock attempt before rounding out the squad. This is how it came out: 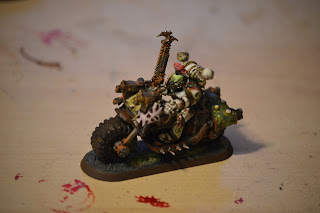 I know, I know. Not even close. But! Much, much better than the previous edition. And that's all that matters, right? Right guys?

Painting this was an absolute pain. Trying to emulate the above artist just made me feel shitty about the whole enterprise. If they can paint like that, why try? The rest of the squad sat on my hobby desk for the better portion of 2 months before I looked each one of these bike bastards in the eye, and said "It's painting time!"

Here are the finished products. I'm happy enough with them, but this project as a whole has shown me a lot about how far from greatness I truly am when it comes to painting (and only painting). 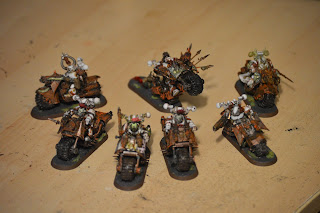 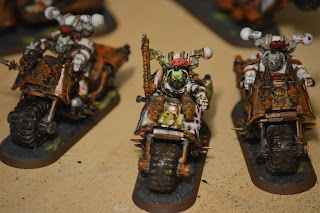 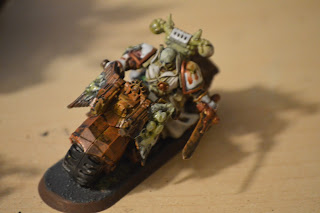 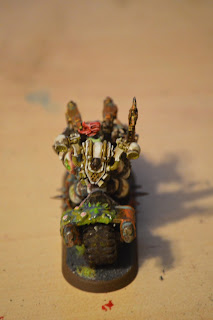 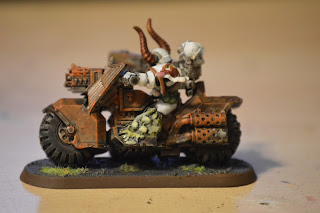 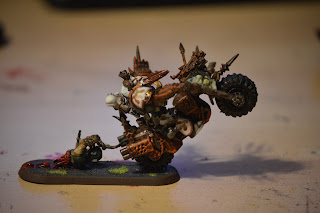 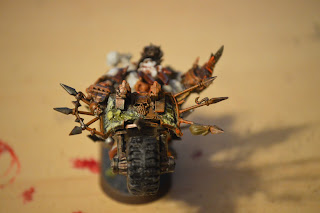 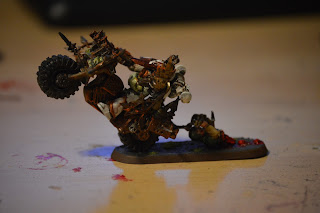 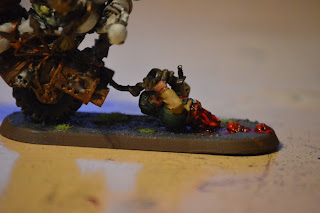 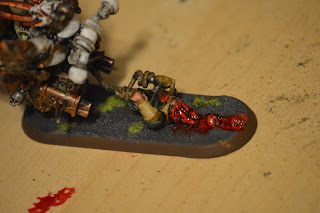 Posted by Hot Dice Miniatures at 19:51