Heralds of Ruin Round Four

This past Saturday evening saw the ending of the fantastically well-run Heralds-of-Ruin campaign. The grand finale was one of custom design which lead to some intrigue, a bit of back-stabbing, and a ton of laughs. Thankfully this time I remembered to take some photos.

If you're reading this: Thanks to all of the players who made the league possible by showing up consistently every week, and playing with GREAT attitudes. There were never any hurt feelings, temper tantrums or rants, and that is a RARE thing when it comes to Warhammer communities. Also shout-out to the chap who ran & organized the entire thing. You guys are all awesome.

Before I dive in I just want to say a few words about my own army composition heading into this match. Due to my win in the last game my opponent and I were the only competitors sitting at 5 Renown. This small feat allows our Leaders to take some special abilities which were not available to the other players (e.g. Parry & Lightning Reflexes). If you're familiar with HoR then you will understand why this is note worthy.

So why was this mission special? What was so cool about game four? Well for starters: everybody deployed on the same 6x4 board. Yep. Oh and did I mention that there were no teams? This would be an old school Dawn of War style Free-For-All. 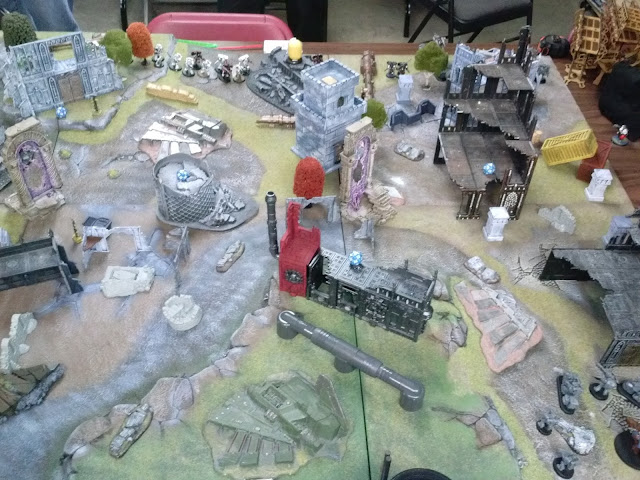 Scattered all around the table were seven blue D20s. These represented legendary weapons that our teams could seize. There were six deployment zones at 6" by 24". This meant that players could deploy a model directly beside another players (enemy) model. Three players would take their turns at the same time, moving through the phases at the same pace (player 1&2 can't shoot until player 3 is done moving). 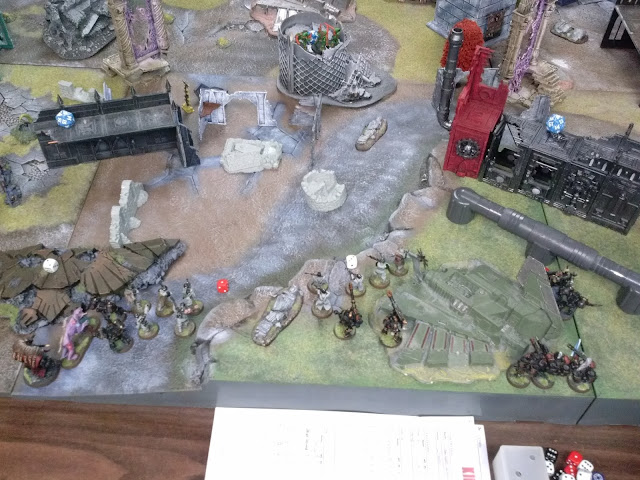 Here is my team deployed. The player directly opposite from me (blood angels/my competition for first place overall), and the players to my left and right went first (creating a sort of triangle shape for turn activation).

To my left: Eldar. To my right: Space Wolves. These chaps were both former opponents of mine, and have both been at the pointy end of my Cthonian blade. They were quick to offer up an alliance in hopes of avoiding endless torment in the warp. A tenuous bargain was struck.

Diagonally left of me: Tau. I hadn't matched up against this player previously (luckily for him!). Diagonally right of me: Space Marines (from my first match-up). 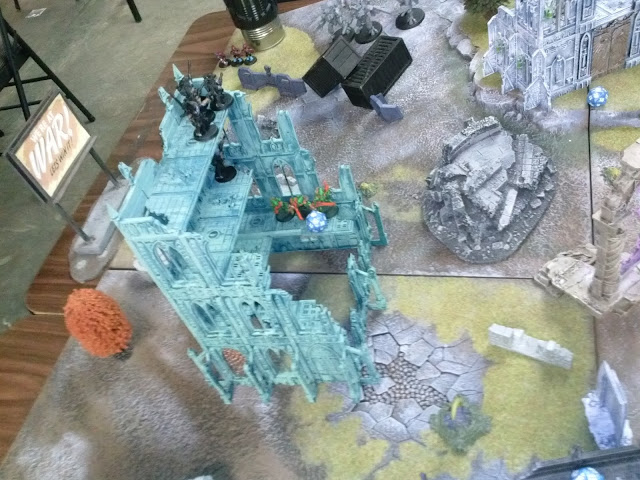 The Eldar hatched a plan to infiltrate into no-mans-land and confiscate some of the relics early on in hopes of running them back towards our deployment zones. When I say our I mean Chaos/Eldar/SpaceWolves. This plan actually ended up working out quite well, but not for the Eldar. 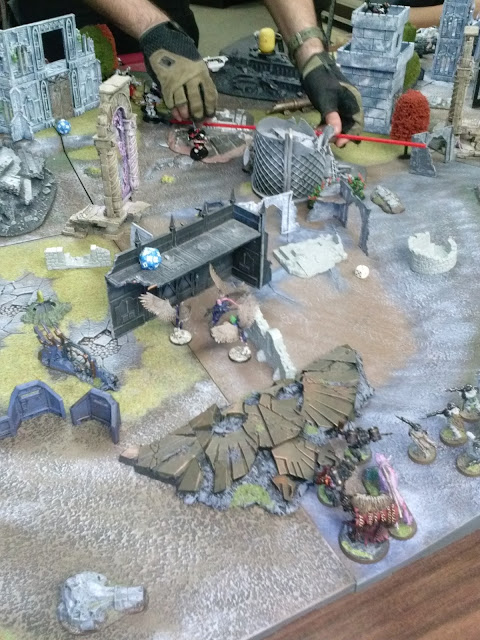 Here we are at the end of my first movement phase. You can see that the Eldar's plan to run the relics back is working out quite nicely!

My Terminator rolled box-cars for his teleport move putting him in a great position to defend the center. Two raptors jump up onto ruins, grab the Legendary items and then subsequently run them down to safety behind cover.

Some of the action on the right flank. When I asked my Eldar ally why he was running his Strinking Scorpions into certain death his response was, "Smoke and mirrors man." Or something like that. It's not easy discerning what those filthy xenos are talking about.

At this point the tau player knows that even if he pushes the Eldar all the way off of the board, the only way he can get more relics is to start massacring the unsuspecting Blood Angels to his left, and Massacre he did. Best. Day. Ever.

My leader ended up suffering a wounded pride result. In the next battle his Leadership value will be reduced by 2, and his inspiring presence will not be in effect. I don't care though because all of the marbles were on this game!

Due to my opponent running into a melta-grinder, and being cannibalized by his next-door neighbor I managed to grab onto, and hold two Relics while he wasn't able to maintain control over any.

I received 50% of the pool in store credit. Not too shabby a reward for conquering an entire star system, and ensuring the destruction of the Imperium. This was *far*  from the result I had initially been expecting before game one.

I want to reiterate one of my initial points: Thanks to all of the players who made the league possible by showing up consistently every week, and playing with GREAT attitudes. There were never any hurt feelings, temper tantrums or rants, and that is a RARE thing when it comes to Warhammer communities. Also shout out to the chap who ran & organized the entire thing. You guys are all awesome.
Posted by Hot Dice Miniatures at 17:38