Heralds of Ruin Round Three... and some other stuff

Another Saturday night has come and gone; the "Not Black Legion" are one step closer to closing their grasp on the Hairy Tarantula system! Unfortunately I forgot to take pictures this time, but was kindly reminded just after the match... so I managed a photo of my opponents team. Trickery was afoot! 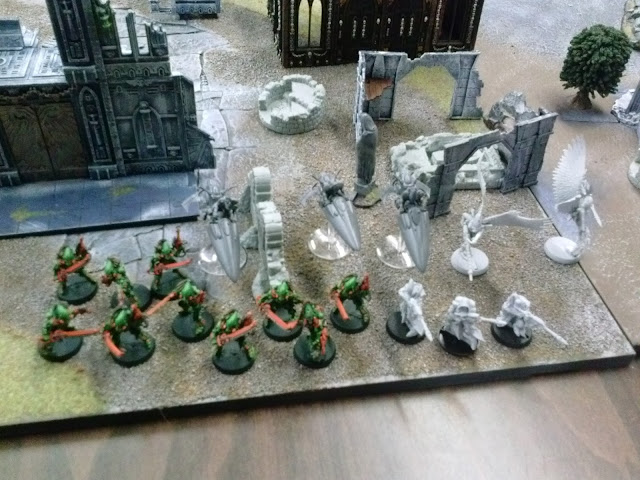 We played a revised version of The Raid. There was some discussion on the Facebook page about the attacker potentially having a HUGE advantage in this scenario. My opponent wasn't feeling too confident so I offered to play as the defender instead of rolling for it. I didn't see the mission to be as skewed as some of the other fellows, and besides I was up for a challenge!

My opponent who was hilarious, and a ton of fun to play with, raised the alarm on turn one! Shooting one of my heavies with a scatter laser turned out to be a huge mistake: all of my brain dead sentries activate, and turn into ravenous jump pack infantry.

After a group of Elf Rangers were torn a new Elf-hole by a space pooch, after a Raptor tripped over a ledge and broke his ankle, after a jetbike riding Guardian slaughtered an enraged raptor in close-combat, and after 6 whimsical game turns the scenario ended with my opponent failing a bottle check.

The Eldar player managed to bring my av 10 objective down to 2 hull-points, but missed his last chance to destroy it by failing to roll a six on two dice in a clutch moment of the game. After being subsequently shredded by a lightning-clawed terminator the space elves lost their nerve, and headed for the hills.

Good game to my opponent! It was fun; feeding your souls to the dark prince was a highly rewarding experience. I'm looking forward to next week's game as it is the last in a series of four. I will be facing off against a Blood Angels player in the top spot for all of the marbles. If I manage to squeak out a win against him the Hairy Tarantula sector will fall to the dark gods, and all will be right in the universe.

In other news I spent the entirety of last Thursday trying to finish 4 more Marienburgers from start to end. I put the finishing touches on them around 1 A.M. after starting roughly 13 hours earliers. They would be required for a few games to be recorded the next day so the pressure was on! I think that they came out just lovely.

As it turned out only one of the swordsmen would be hired but nevermind. Over Friday and Saturday I played 4 games of Mordheim and 1 game of Necromunda. The games were played down in St. Catharines with Ash and Owen from Guerrilla Miniature Games and Gaming with the Cooler respectively. You can expect to see those popping up here and there over the next two months.

One last piece of agenda. while I was at Hairy Tarantula I also picked up these two bad mamajamas for myself:

Posted by Hot Dice Miniatures at 10:25