As I said in my previous post I've been collecting a Black Legion army for the better part of three years. In that window of time I have amassed just shy of 9000 or so points (fully painted I might add) to field on any given occasion. I got to thinking: How can I more fully represent the Black Legion without just duplicating the units that I already own?

Before I answer that question I'll let you get a glimpse at the force so far: 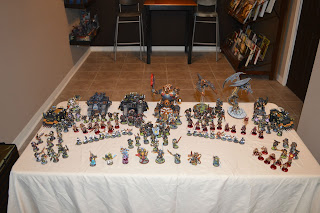 I always get a kick out of comparing the above photo with the one below which was taken in September 2013. This hobby truly is a sickness. 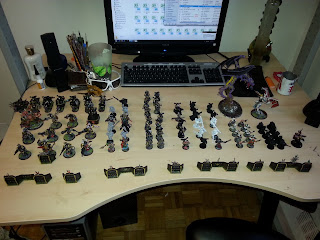 Any of you Choas savvy folks out there might notice some Imperial Armour 13 units in the first picture. This brings me back to my original question: How to add to the force without duplication. The answer dear reader is: Renegades and Heretics!

I was gutted when 7th edition came out, and scrapped Guard as allies for Chaos. How dare they? Well thankfully Forgeworld had the grace to bring our traitorous humans back, and in very stylish fashion at that.

For those of you who don't know, when creating a Renegades army list the warlord can select a special doctrine which can affect how your army list works. When looking through these one jumped out at me as 'way-cool'.

The doctrine is called "Bloody Handed Reaver", and it essentially allows for you to upgrade your veteran units (very similar to Astra Militarum Vets) to Grenadiers (Scions). They are upgraded to BS4, carry hotshot lasguns, and for 5pts they can purchase a hotshot volley gun! How dope is that?

After deciding to jump in head first, and a forgeworld order, i'm about 70 little plastic men richer.

At this point I should mention that I had a left over box of 3 Scions from a Creed and Kell conversion I had done for a friend a ways back. So now we're at about 73 little heretics.

About 2 weeks ago I was having a game in my basement with an Ork buddy. After showing him my order, and talking about my plans for the Renegade army he explained to me that he had about 30 or so Chaos Marauders from Fantasy (R.I.P.) that he didn't end up using. Long story short HE GAVE THEM TO ME! What a swell guy. So right now I'm sitting at about 103 little heathens! A 40k goon truly couldn't be happier.

So where is all of this back story leading to? Conversions of course! Chaos Renegades are truly a kitbasher's wet dream. The very first thing I got to working on was the five man Grenadier squad. Here they are in all of their glory: 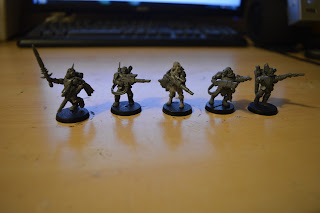 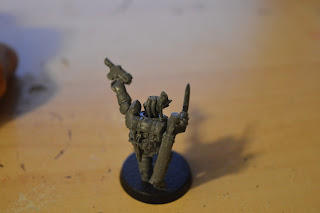 So there you have it. My little bit of progress on this new project so far. I'm sitting here looking at bowls, and bowls of washed grey resin to put together. At least I've got all the washing finished; that was a nightmare.
Posted by Hot Dice Miniatures at 12:07