Heralds of Ruin Round One

I'm back from the front-lines, and I can say that the kick-off to the Kill Team campaign was a success. Eight combatants signed up for a total of four pairings per round. Ten showed up, but two decided not to commit after discovering the 10 dollar fee.

My game was against a fellow named Taher who was commanding a team of (gray) Ultra Marines. His list looked like this:

We squared off against each other in the mission 'Escalating Skirmish'. Each side cuts their force into two halves. Group A deploys at the beginning of the game, group B outflanks (rolling for each model individually). The outflanking opened up some neat maneuvering opportunities for both my opponent and I before the match ended. 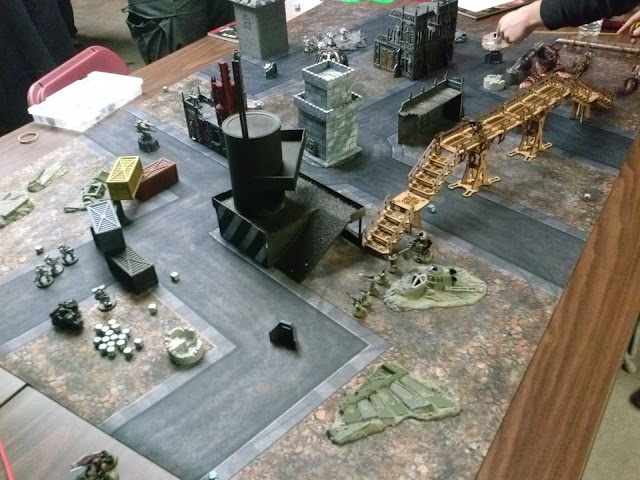 I asked my opponent if he would like to try to seize on me as I had first turn. Being quite new to the game he responded, "What's that?" After explaining the mechanic to him he proceeded to roll a six like a boss.

I deployed my Lascannon wielding marine on the stairs (top right of photo) with a commanding view of the battle field. To counter this my opponent deployed his tactical with Missile Launcher opposite on a ruin with a similar (but opposite) view of everything. I also chose to deploy one cultist squad and my big-bad-terminator. His missile launcher is on (his) left flank; he rushes the right flank with 3 tacticals, an attack bike and an assault marine (flamer). 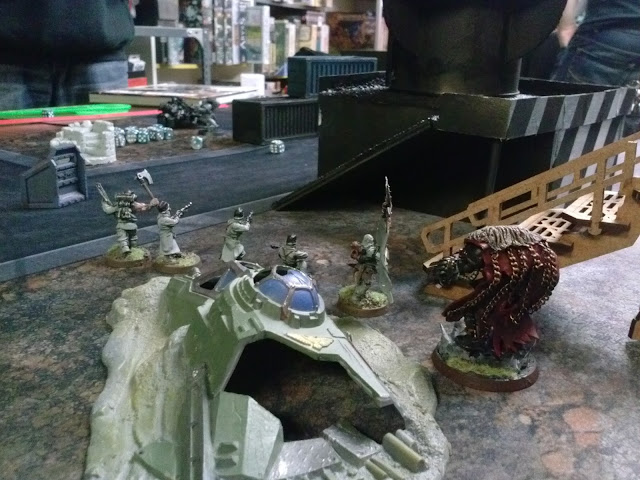 View from my front lines at the bottom of turn one. At this point my lascannon can't see shit, and I have two options: Hide under the stairs, or run straight at him! 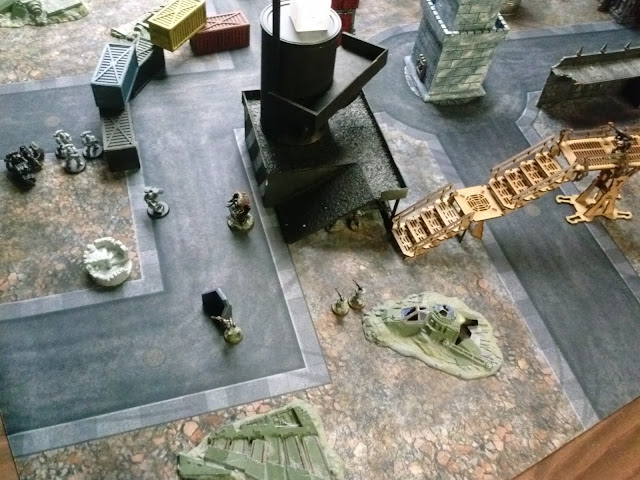 Two of the cultists decide to duck under the stairs, while another one dashes for cover; the last two hold the line. My Terminator is equipped with a teleporter which allows him to roll 2d6 (adding them together) for movement with the hindrance of not being able to charge. Well wouldn't you know it? I rolled an eleven for that sucker. 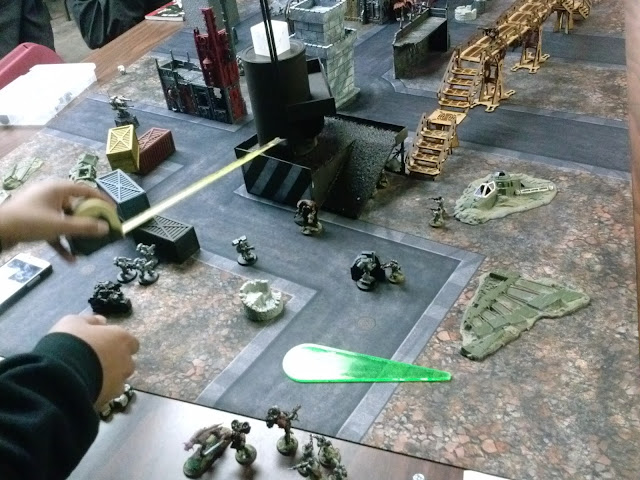 On my opponents turn only one of his assault troopies arrive, and he decides to move his missile launcher (not visible) to a better vantage point. The one arriving assault marine outflanks to my left flank, and takes aim at one of my cultists. He missed! 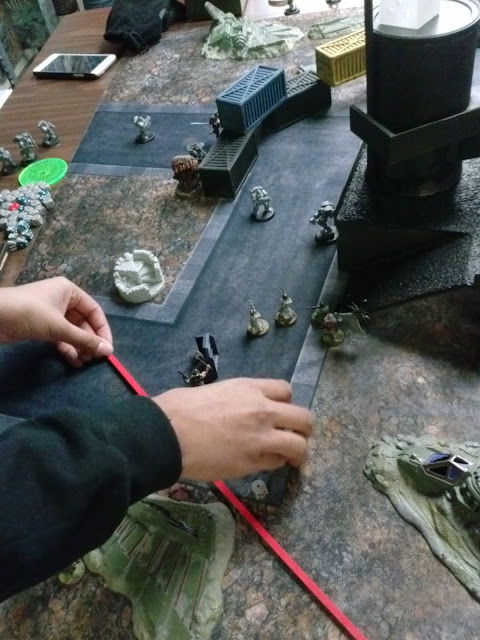 A scrum in the middle takes place. My lightning claw termie makes a mess of his spear head. 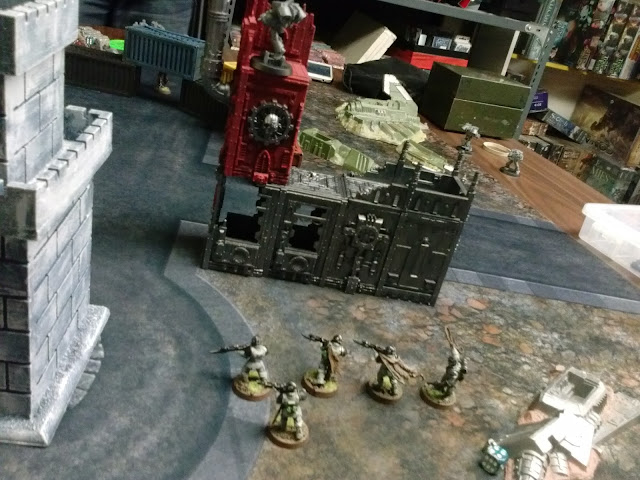 My reserved cultist squad arrives just behind his hidden Missile Launcher marine. I scored a hit taking the legionary out with a lucky six on the injury table. His assault marine buddy looks down at my cultists through a blood speckled visor. 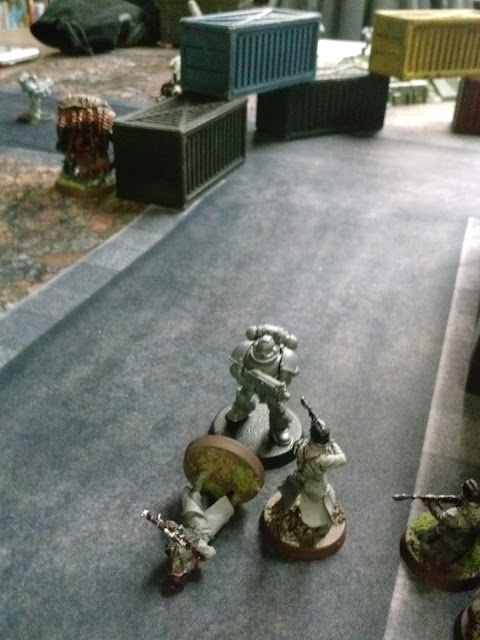 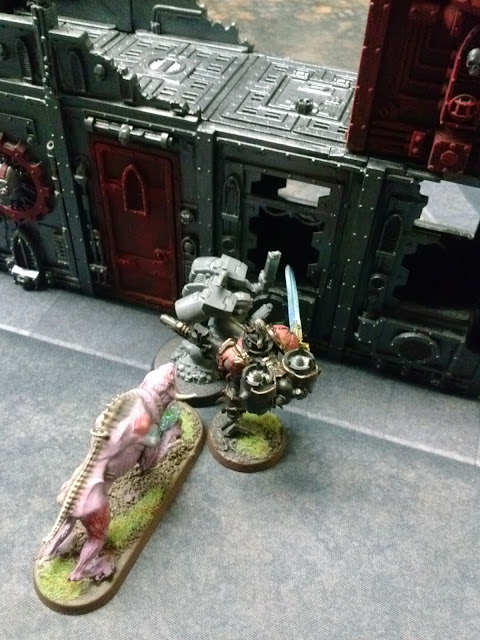 Eventually my leader corners his leader. They battle each other in a dual which proves to be fruitless by the end of the match, neither warrior managing to better the other. 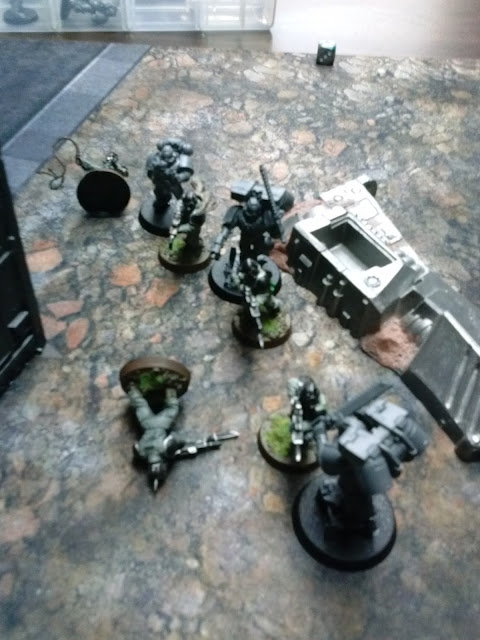 Before the match ends one of his assault marines manages to make it onto my Lascanon's perch and take him out with a chain-sword to the chest. The game ends in a draw.

My cultists were proving to be quite the task for these Ultramarines. Every time one would get knocked down another would stand back up.

After rolling for permanent injuries my death tally stands at one dead cultist. My Lascanoneer sustained a minor injury and will be considered 'winded' for the next game (movement halved).

For the draw I was awarded one renown, and collected a total of 25 Requisition Points (RP). RP can be spent on upgrading your base, battle honors for individual models, or converted into points (1RP = 5pts) for hiring back dead models or requisitioning new units.

For the next match everyone is capped at 300pts (for their team), so I spent 1 RP on hiring back my dead cultist, hired another raptor, and another chosen equipped with an auto-cannon & Targeter. I also used 10 RP to upgrade the *winded* chosen to ballistic skill 5. He will now hit on a 2+ and re-roll 1's if he doesn't move in the previous movement phase. Baller.


I'm sitting at a comfortable 17 models. Here is the cheery bunch discussing battle plans for the next encounter! 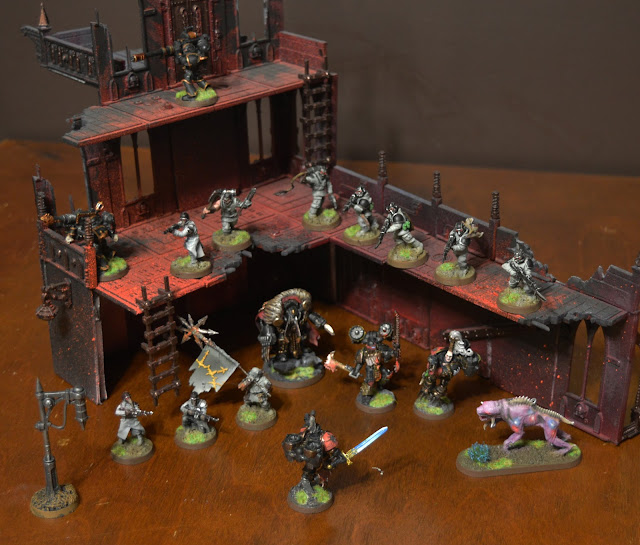 Posted by Hot Dice Miniatures at 20:24