Heralds of Ruin Round Two

In the past two weeks I have played a game of 40k, two games of Kill team with an awesome group of new faces, and Dungeon Mastered my very first two games of D&D. 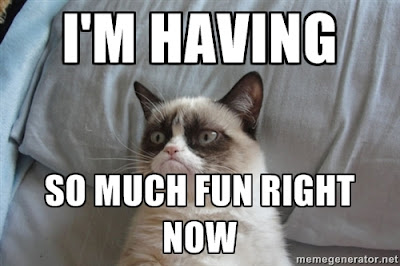 Last night marked the "Not Black Legion's" return to segmentum Hairy Tarantula. Fate would see them squaring off against a raving band of space-puppies. My opponent Patrick was a great guy, but to my chagrin he was fielding three thunder wolf cavalry backed up by tacticals and bikes.

Shop keep announced that we would be playing Take and Hold and we were off to slice n' dice one another. One of the players brought in the new Front-Line Gaming 'Industrial' FAT MAT to share with the other players. I felt like I needed to mention that because FLG really knocked that one out of the park. In person it truly is striking; it works perfectly for kill team, but would be even better for Zone Mortalis. Unfortunately I was robbed of playing on it this round; maybe next week!

Anyway, my opponent and I squared off. I rolled higher to determine which quadrant I would deploy in, and naturally chose the side with 3 easily accessible buildings. It would be an up-hill battle for the puppies from here on out. 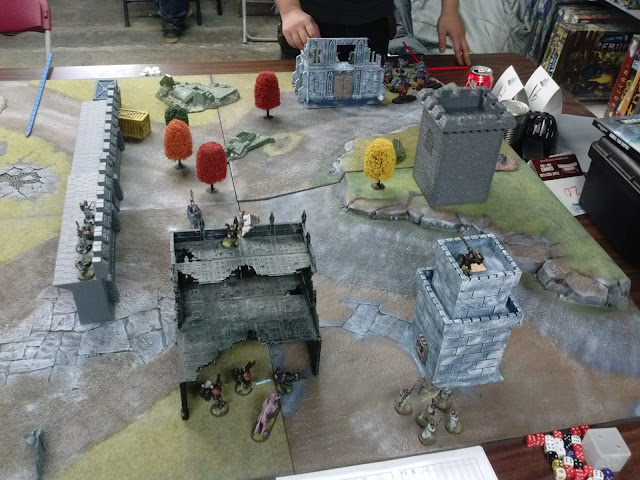 The objective of Take and Hold: Control more buildings (out of the 5) by the end of the game than your opponent for a victory. Any building housing models from both teams is considered contested. The long wall on the left is the fifth building.

I should point out at this point that this mission REALLY hinders my opponents ability to score as his team consists of three thunder wolf cav (beasts) and two bikes, all of which CAN NOT enter buildings. Like I said: up-hill battle.

The battle ends at the end of turn 7, with 4 deaths on either side. The 'Not Black Legion' control 3 buildings, to the Space Wolve's 1. We rolled up for our casualties and there are no deaths on either side; however his team leader will be sitting out the next game for some augmentation.

I achieve a major victory for the dark gods and collect 2 more Renown Points as my Team-Leader's clout begins to grow in the Hairy Tarantula system. I gain 20 Requisition Points for participating, 5 for victory, 3 for assassinating his team leader, 2 for considerate commander (4/16) and 3 more for controlling 3 buildings. I had been sitting on 4 from the last battle which puts me at a total of 37 RP.

This is the part of the post where I tell you about how much I agonized over how to spend those 37 points. No matter what 10 of those were going towards purchasing a Medical facility. Mitigating the chance of my team leader succumbing to injury is obviously a high priority. This leaves me at 27 RP.

Since I suffered no permanent losses I will only need 10 more RP to boost my Team roster to 350pts (the limit for the next encounter). This will leave our RP reserves at 17 for battle honours.

I narrowed the options down to two choices:


I slept on the decision. I woke up and thought about it some more (yeah I know I need a life). While another cultists squad running interference in the front lines with a flamer would put my model count at 23, it would leave me with essentially the same amount of hitting power that I have now.

The biggest issue that I keep running into is a stark inability to get the job done in close-quarters. By giving my team leader +1 WS and the Cthonian Blade(AP3, Fleshbane), he will be hitting space marines on 3s at I5, and always wounding on 2+. This should lead to at least one dead space marine per turn which should produce some head way in the inevitable scrum for the middle. I should also mention he will now be backed up by 4 raptors all with furious charge: Strength 5 baby!

Do you think I made the correct decision? Here's the Roster sheet after flipping between each choice about 10 times: 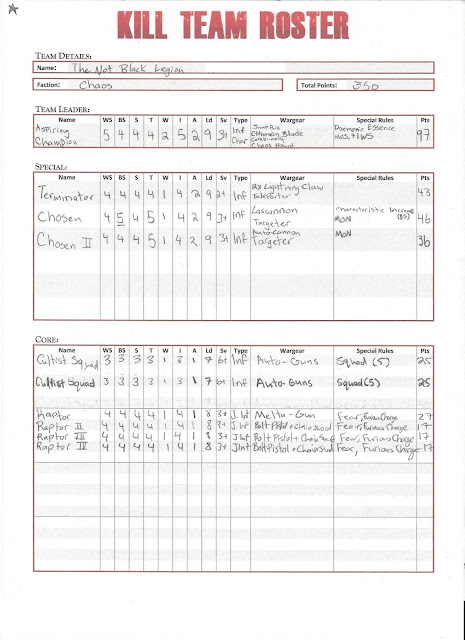 Posted by Hot Dice Miniatures at 11:11